The Elvish language that may be heard in one or another film is actually one of the dialects invented by J. R. R. Tolkien. There are more than fifteen of such ones: Eldarin, Telerin, Lemberin, Quenya, Sindarin (Grey-Elvish), Goldogrin, and many others. For each of them, the author came up with a race with its own history and historical changes, which improved the speech.

John Ronald Ruel Tolkien based them on Old Norse, Welsh, Old English, Latin, and Finnish languages. If you try to analyze each of them, there is a high probability of confusion, so let’s analyze only those ones that J. R. R. Tolkien fit his stories to publish them.

The illustration below shows the Elvish alphabet called Tengwar. All letters of the Elvish language are presented with their English equivalents. The presented alphabet will help you to translate words and phrases from the English into Elvish correctly. However, for a number of reasons, translating into Elvish is not an easy task. 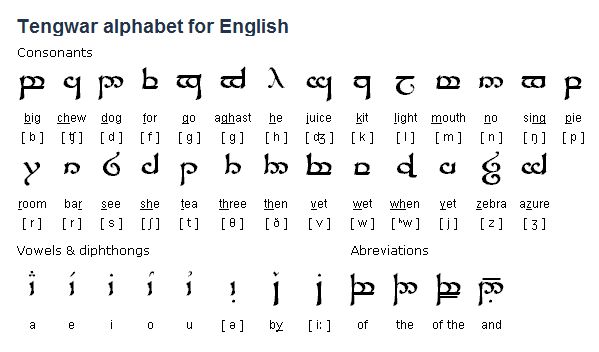 Complete and the most interesting of the two most popular Elvish dialects is the final version. The literal translation is «gray dialect». According to the Tolkien’s mythology, gray elves of the Teleri tribe spoke Sindarin. During the Great March, they decided to stay in Beleriand, and after all, their language might be differed from the dialects of other tribes that sailed across the sea.

The pronunciation of vowels does not depend on their positions in the word, they are usually pronounced the same way. As a rule, they are all short. Each letter is pronounced separately from another one, even if there are several of them in a row. Each language has its own exceptions. There are also six diphthongs where are two vowels pronounced as one sound. This is something to be learned. The first element is always stressed. The consonants are simpler, they sound like the English ones. However, you should know that double consonants are pronounced longer than the single ones.

As for Elvish, it is very important to know which syllable is stressed. The speech is based on two basic rules.

Following is an example of Elvish spelling of words.

To begin with, it is enough to know these points. It will be much easier to figure it out later.

Sindarin phonetics is very beautiful, that is why it is called a «living» language. It is the language of the most of spoken phrases in the film “The Lord of Rings”.

The Elvish language is spoken in films, books and numerous computer games (WOW, Dragon Age, The Witcher). In fact, you can often see single Elvish phrases. Specific melodic sound of the Elvish language also promotes its popularity. You can listen to the Elvish sounds on the pages of the site.

It is a constructed language. Its grammar and spelling are mostly borrowed from Greek and Latin words. It was changed many times. At the same time, Tolkien described the people who spoke the language, as well as their history, customs, and the Middle-earth. The world-famous story of hobbits, gnomes, and elves was based on the descriptions and became the part of classic world fantasy.

However, in the novel, we did not see the Quenya, because at the time of the events described, it fell out of use and became a «dead» language. J. R. R. Tolkien called it «Elven Latin», the High Elven dialect.

The length of pronunciation of written vowels is various. The long ones are marked with stress; the short ones are clear and have no variations. There are six units of Quenya diphthongs like the Sindarin ones. There are several rules associated with consonants, but most of them sound like English consonants we are used to. Stress is defined like the Sindarin one. All these facts indicate that Quenya is the progenitor of Sindarin.

Nowadays, there is a great number of textbooks and manuals on Elvish languages. There are grammar and pronunciation differences. However, they are not significant. First of all, it is a fictional language. The Tolkien once recorded his reading of Elvish poems, which he dedicated to his daughter. This is the only way to understand pronunciation of the Sindarin sounds roughly.

Some people think that idlers are the only people who involve in learning Elvish. Such people think that it is a waste of time. However, this is not at all the case. If carrying away by fictional linguistics which grammar and phonetics are so rich, you can develop yourself internally. There is a linguists’ opinion that language determines thinking and changes the views of things. After studying such things, it is easier to understand the structure of real languages, i.e. not artificial and actively used languages in the world.

If you still decide to develop as an elven linguist, here are some tips for you:

So, you have learned how to learn the Elvish language independently and what it is. Don’t stop your studying and see the first results soon!