It became a rule to consider that the Maori came to New Zeeland from Central Polynesia. It was likely that there were some migration flows since about 8 to 13 century a.d. The language is about 800-1000 years.

At first, there was no written language so the Maori used a specially made symbol system. Later, the Maori colonized the islands of New Zealand more and more. The Maori population rose gradually. That was a reason for the necessity of alphabetization. At the beginning of XIX century, the Europeans were the first people who tried to invent the written language. Notably, active migration of the British to the New Zeeland islands caused a strong impact of Maori on English language. English language was the main source of loan Maori words though in turn, the Maori language had a strong impact on English language.

Some Facts about the Language

1. Maori is analytical language of the Polynesian languages group. Written Maori language was invented at the beginning of XIX century, it was mostly impacted by the Europeans. The Maori alphabet consists of 15 Latin letters (five of them are vowels of different length). 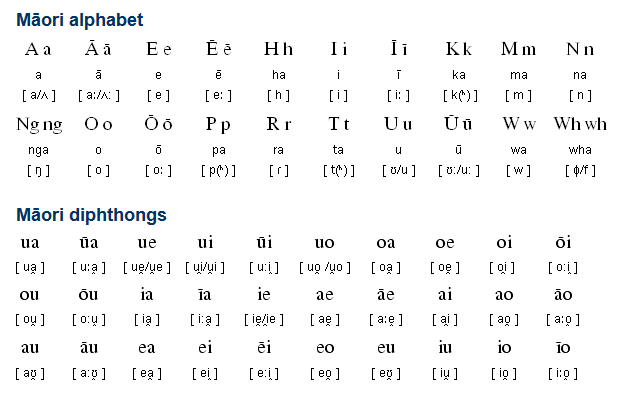 2. Despite many English words, there is no linking verb in Maori but a particle ko is actively used.

3. Nouns are not inflected for case, their singular and plural forms are identical. Plural form of nouns is conveyed by plural definite article ngā.

In the middle of XX century, despite many speakers and the fact that Maori was one of three official languages of New Zeeland like English and NZ Sign language, Maori was endangered of extinction. Why did it happen? English was the main reason for that. There were also other reasons.

Joseph Banks noted that Maori dialects were one of possible reasons for that. He used some words depending on what island aborigines used them, then, he divided them into “North” and “South” groups. The next case proved his theory.

A missionary James Watkins came to the South Island to catholicize the Maori. He tried to use the North dialect for speaking but aborigines did not understand him.

The dialects differ lexically and phonetically. There are also some grammar differs but they do not play a vital part.

The Maori dialects are conditionally divided into East and West ones. There is an opinion, that the main reason for that is gradual colonizing of New Zeeland by different groups of Polynesia nations. However, dialects are not divided into the territorial groups but they divide into kinds of tribes speaking them. Even in XXI century, self-identification of the tribes is very important for the Maori; dialects are still an important tribe indication.

The sociolinguistic situation of the middle of XX century was also a reason for danger of extinction for Maori language. It was true that at that time, local newspapers were published in Maori. It was true that most of names of railway stations, cities, and mountains were also in Maori. Even Mount Cook was renamed. However, all these facts were something like a favor, which the New Zeeland aborigines did for the Whites. By that time, some part of dialects had been become extinct, there were fewer people who could understand Maori language, they could not speak Maori in shops, on railway stations, in police, or in some other places. For example, a Maori depute spoke his language at the Parliament. Nobody of those people who was present there did not understand him. It was necessary to call a translator who was also at the next Parliament meetings. Of course, the depute could not speak English but it was a matter of principle because the Maori had the right to speak their native language.

Currently, there are various programs to protection Maori language from extinction. Besides, there are many manuals for the language self-studying. You can find some of them on our site.