The Na’vi language is the constructed language created by Paul Frommer, a professional linguist, for James Cameron’s production and his film Avatar. I think that, after watching the film, many people became interested in this language, and some even began to learn it. Actually, why not? It is unique and simple in the structure at the same time. Let’s see how the Na’vi language was created.

While creating the language, Paul Frommer faced many challenges. Later he admitted that it was difficult for him to construct it since the Na’vi language was supposed to sound alien-like, but at the same time, be easy to learn. And we shouldn’t forget that the actors had to learn this language to varying degrees.

Paul Frommer built up the vocabulary gradually. Even now, it is continuously updated. He considers it a good idea if his brainchild continues to develop.

If we look at the language structure, we’ll see that it is more like the Australian and Papuan languages. Frommer himself mentioned that it sounds and looks more like German.

Interesting fact: It took 4 years to construct this language. It consists of more than 1000 words.

As in any other language, the Na`vi alphabet also consists of vowels and consonants. But it includes 4 more diphthongs: aw, ew, ay, ey.

It does not have voiced plosives like [b], [d], [g], but there are letters pronounced with a glottal stop. These are the letters px, tx, kx. The syllabic consonants ll, rr are also present in the alphabet.

In the Na’vi language, there is also assimilation — a sound change in which some phonemes change to be more similar to other nearby sounds. Such as the sound -ng. If it is followed by a consonant -m or -n, then it is likened. For example, ting mikyun, which translates as «listen» will be pronounced [tim mik`yun] due to the assimilation rule.

This language has no gender. The only difference between male and female is the presence of suffixes. 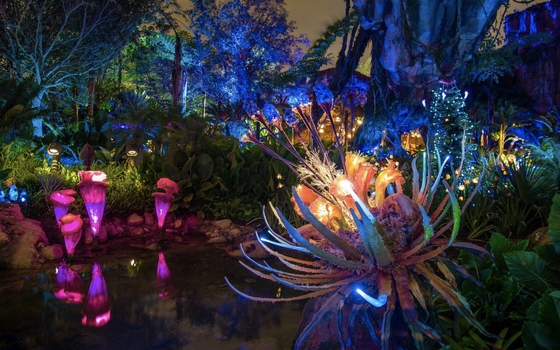 Prepositions may occur either before the noun or after the noun. For example, «with you» may be either hu nga or ngahu. In both cases, it will be correct. Many prepositions can assimilate if they are placed directly before nouns. There is a strict rule, which indicates that to compose a phrase in the plural, you must use the prefix ay+. And it is placed between the preposition and the noun. For example, mì aysokx, which means «in bodies». Besides, the phrase sounds like [maysokx] because if the vowel of the preposition is in front of the prefix, then it is not pronounced.

As we remember, the people of Pandora have their common system of counting and numbers. But since they differ in appearance from people, they have only four fingers on one limb, and instead of a 10-number system, humanoids use an 8-number system.

Numbers greater than 8 are formed by attaching prefixes.

Certain suffixes are used to determine the number of units in a number.

In Russian and English there are three tenses, but in the Na’vi language, there are five tenses: future, near future, present, recent past, and past. Time has two aspects: perfect and imperfect. The difference between aspects and tenses is in their infixes.

Emotivity is used to show the speaker’s position on a matter or object and classified into 4 groups: positive — ei, negative — äng, respectful — uy, and doubtful — ats.

Let’s take the phrase «I see you» as an example. In the Na’vi language, this sentence translates as Oel ngati kameie. I — oel, see — kameie, you — ngati. In this case, the emotivity -ei shows a positive attitude of the interlocutor towards the subject.

For a more successful consolidation of the rule, let’s analyze another example. Oeri ontu teya längu — literally translates as «My nose is full». This sentence is about the smell. The presented expression teya lu, which means «full», is formed as teya l‹äng›u so that it is clear that the speaker is expressing dissatisfaction with the situation.

The Na’vi language has cases. Most case suffixes have different pronunciations.

Adjectives are placed before or after nouns. They are also indicated by the particle — a, which is written on the side of the adjective where the noun is closer. Let’s take «Long River» as an example, ngim-a kilvan, or write the other way around kilvan a-ngim.

The vocabulary of the Na’vi language is closely intertwined and forms strong bonds. One word, using auxiliary parts, passes from one form to another. With the help of prefixes, a word smoothly flows from one part of speech into another. Ordinary readers and true fans can only admire the genius of the linguist Frommer, who spent a lot of time and effort to create a completely new and different language.