Military ranks in the Soviet and pre-revolutionary Army were considerably different from the modern ranks. The formation of the Russian Army in the modern sense of the term was started by Peter the Great; it was he who instituted virtually everything it has now. The ranking system was largely influenced by Europe, although at that time the concept of military ranks did not have the same significance as it has now. Shoulder marks were created to draw lines between the duties of the military servants, as the higher the position is, the more responsibility the serviceman bears. Shoulder marks also play their role in visual distinction, being instrumental in understanding the position of their bearer.

Shoulder marks and their colour help to distinguish between the ranks. Non-officer marks have small stars arranged vertically, they have no stripes or any other signs. Officers’ shoulder marks have big stars and stripes. Apart from that, the size of the shoulder marks is different. There are only two rank types in the Russian Armed Forces – the Navy and the Ground. Naval ranks are granted to seamen of the Submarine Forces and the Naval Surface Forces of the Navy and of the Federal Security Service, while ground ranks are granted to the members of the Ministry of Internal Affairs, the Emergencies Ministry, the Foreign Intelligence Service, the Federal Guard Service and other services.

Military ranks before the Russian revolution

At that time, some modern military ranks had other interpretations. In 1722, Peter the Great introduced the Table of Ranks that lasted until the times of Nicholas II and was annulled in 1917. The decree established new ranks of the Cavalry, the Infantry, the Navy and the Guards. Shoulder marks were different from the modern ones. Every military branch had their own type of shoulder marks that were sewed on each serviceman’s uniform. Shoulder marks for soldiers and officers had the same colour, which seems impossible nowadays. The placement of stars did not follow any strict rules, almost anyone could get them. Shoulder marks of the lower orders and ranks had a smooth surface with the regiment number indicated; the colour depended on the military branch. Infantry troops wore red shoulder marks. Before the First World War, it was decided to introduce a single khaki colour. 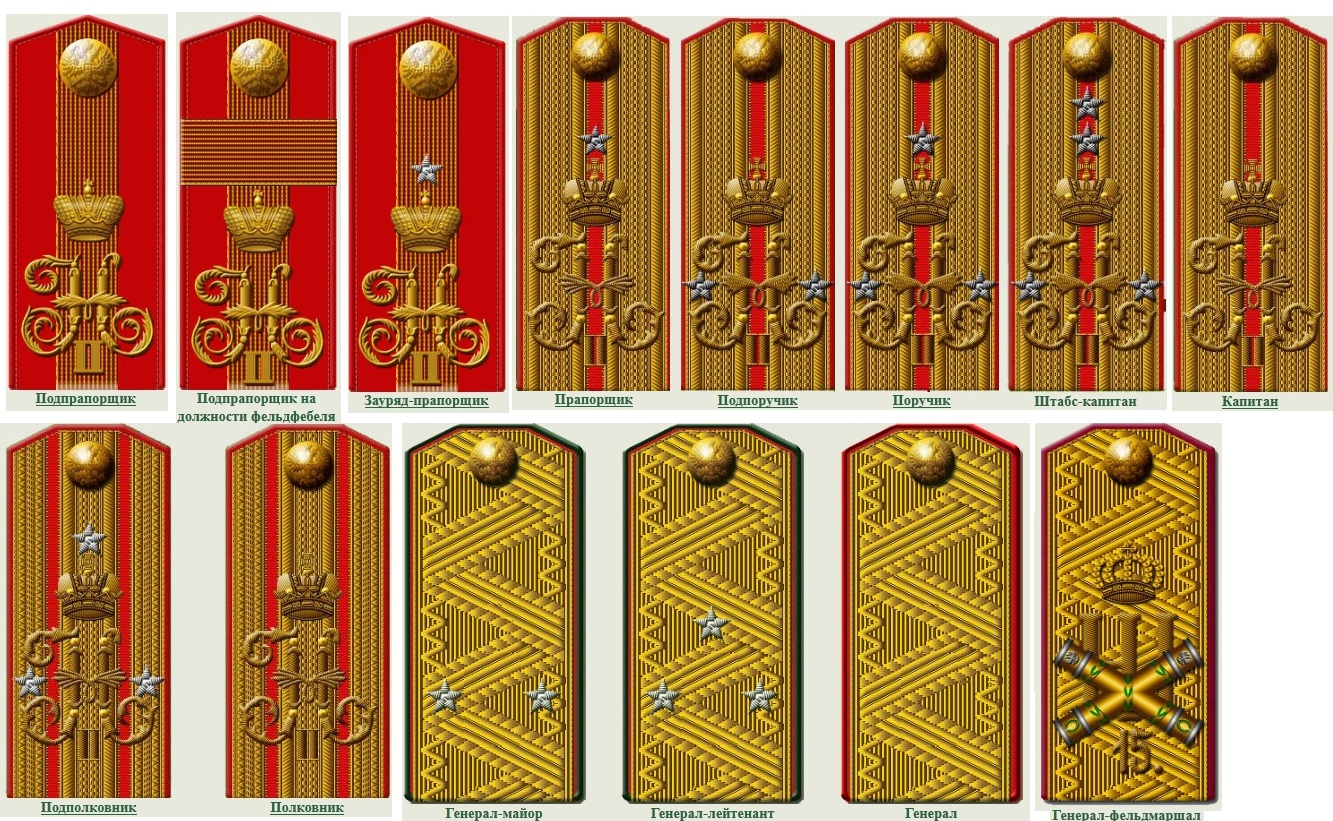 One of the peculiarities of the Tsarist Russia was that Cossacks and their troops served in regular military units. The Cossack troops were included into the Table of Ranks and were considered a separate army with its own ranks. The term “rank” was non-existent in all the armies, and the term “chin” (or tier) was in place instead of it. Under Peter the Great, Europeanization began, and many things from other European countries were adopted.

In 1930-ies, the Council of People’s Commissars cancelled the directive regarding military categories. According to it, everyone had a peculiar rank, and the whole system was considered rather complicated and outdated. The end to this system was put only on the 20th century. During the Great Patriotic War and Stalin’s rule, the totalitarian regime manifested itself dramatically, and it was forbidden to say anything against or in defiance of the leader. People widely criticized the decision to introduce shoulder marks again, which was evidenced by the press: newspapers, magazines, radio. Stalin’s decision seemed strange and terrifying. Many people thought the winning spirit of the Army would collapse and the war would be lost. 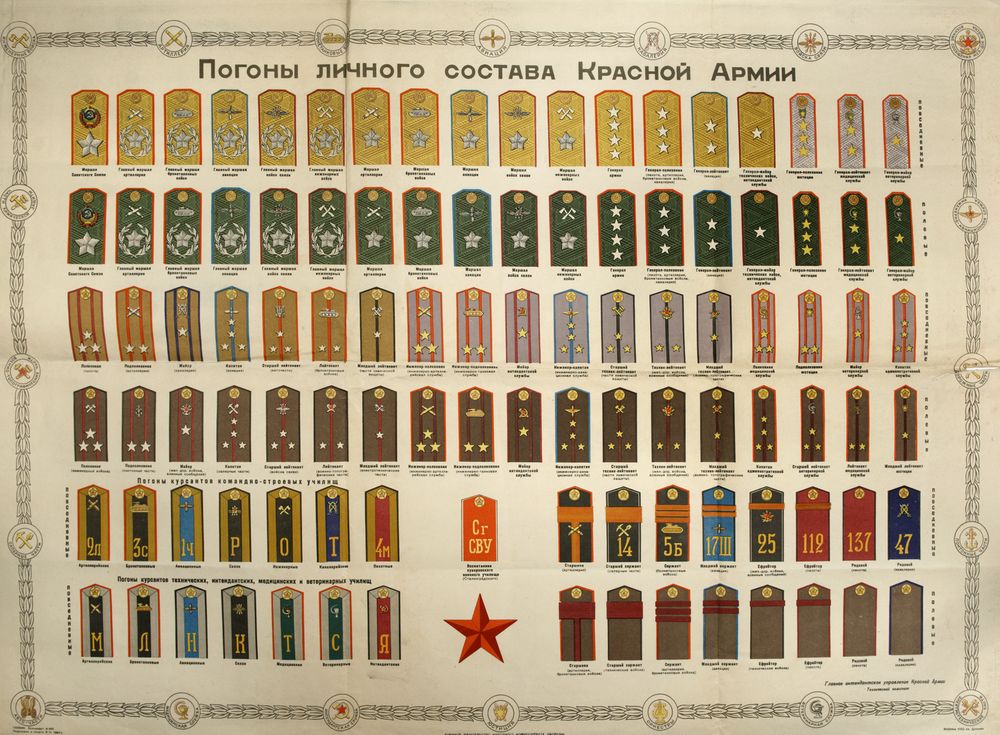 Those shoulder marks were not the exact copy of those existing under Peter the Great. Many things were similar, while many were quite the opposite. Stalin insisted that the stars on the marks should have a single size. Servicemen of the highest ranks wore only big stars on their shoulder marks, the lower ranks had small stars. In 1969, an obligatory procedure for wearing military uniform that had never existed before was established. A single colour of shoulder marks and clear-cut rules were introduced for the high military ranks. Ground troops wore red, the Air Force wore blue, and the  Navy of the USSR wore only black shoulder marks. The uniform was different for each occasion, it had distinctions: the everyday, the working and the ceremonial. The working uniform was used to perform urgent tasks, the ceremonial was only applicable for formal events, and the everyday uniform, for day-to-day service.

In modern Russia, ranks have changed a little as well as shoulder straps, but not significantly. And now, the position of a person is determined by the number of stars on the shoulder strap. 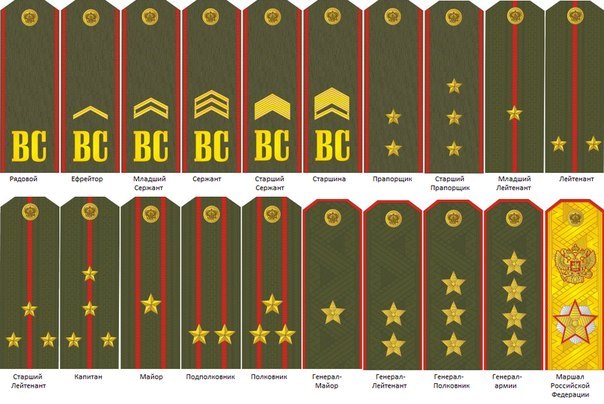 The lowest rank is a private. Only cadets are below the private. A private first class is considered slightly higher than a private, but not significantly. A junior sergeant is considered higher than a private first class. The rank is awarded to a soldier who fulfills all orders and excels during the service. Next is a sergeant and a senior sergeant. Their positions are similar, but the senior sergeant is entitled to command an ordinary sergeant. All of them are subject to a first sergeant, he is considered the best sergeant. The first sergeant is followed by a warrant officer. He is higher than sergeants but still below an officer. A chief warrant officer commands all the others. Then there are a junior lieutenant, a senior lieutenant and an ordinary lieutenant. All of them have almost the same opportunities and privileges, but they submit to the senior lieutenant. The rank of captain exists longer than the others, the captain commands the entire company. Major is the highest rank in the initial order of precedence. This is followed by a lieutenant colonel, he is commanded by a colonel, who is considered the latest and highest rank. Then comes major general, then – lieutenant general, colonel general, army general. The highest closing link in the chain of military ranks is marshal of the Russian Federation. At the moment, this is the highest rank of the Russian army, he commands everyone.