In the last ten years the Russian army has changed a lot. It has being actively rearmed, has become more powerful and more capable. It is viewed differently in Russia and in the world. Mostly it is because of weapon which Ministry of Defence buys from our defense industry. There are a lot of costs involved. In 2019 alone defence budget amounted more then 1.5 trillion rubles. What are the funds used for? Which weapon maintain our safety? «MK» (Moscow Komsomolets) decided to answer to these questions in our new column «Check the facts!». The first selection is focused on the most beautiful and most belligerent (considering the Sirian experience) for of the Armed forces — VKS aviation. Next time we will tell about the best armored vehicles, fighting ships of the Russian Navy and drones.

5th Generation jetfighter Su-57 is most modern Russian air-warrior. It was created to replace the acclaimed 4th generation reference, the famous Su-27 fighter. Su-57 is multifunctional fighter which engages targets in air and on ground. 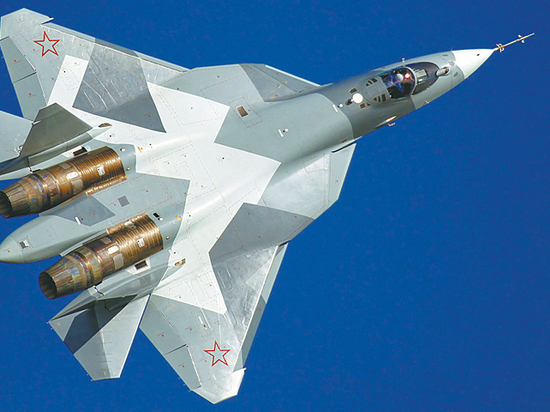 It has swift, elegant appearence. Configuration and composite materials used instead of metal make the aircraft undetectable to enemy eyes and radars. To reduce radar visibility, a large section of rockets is hidden inside fuselage. Airplane is armed with Electronic Warfare suite capable to deceive the enemy and make them viewless.

It shows that this is a high-tech product. Specialists call it flying radome, because numerous radar elements and sensors of all sorts are distributed virtually over the entire surface of the wing and fuselage. That is why Su-57 skin sometimes is called «smart skin».

Su-57 also can be used as flying commend post to control a flock of drones. As an example leading a group of heavy strike drones, the Hunter.

NATO called the Su-57 the «Felon», perhaps because of its ability to sneak up on the ground and strike unexpectedly.

Russian designers have been in a catch-up role in developing the 5th generation aircraft. The US already has entire air divisions of F-22 and F-35 5th generation aircraft. But our developers have been able to avoid the bumps that the Americans have picked up in mastering the new generation. Main problem is the cost of new airplanes. The price of a single F-35 is about $100 million, and the F-22 is even higher. Developers promise that our airplane will be considerably cheaper.

Maiden flight of airplane was 29 January 2010. The pilot was honoured research-pilot, Hero of Russia, Sergey Bogdan. At the time, jetfighter was given the working title T-50.

Su-57S have had time in Syria as part of a Russian air group fighting terrorists. Russian Ministry of Defence has ordered a trial batch of a dozen fighter jets for trial operation. Then mass deliveries of the Su-57 with the new engine are expected. The new engine will enable the aircraft to fly for long periods at supersonic speeds over vast distances. In the first stage military will receive 76 airplanes for three aviation regiments.

Su-35S and Su-30CM are kings of supermaneuverability

Russian VKS is also actively buying the Syria-proven Su-35S multi-role, super-maneuverable «4++» generation jetfighters. A total of about 100 vehicles have been ordered. Su-35S is an intermediate between the aviation veteran Su-27 and the military-technology leader Su-57S. But Su-35S is not an «unloved guest» of the 5th generation representative. It could very well compete with it in number of respects. 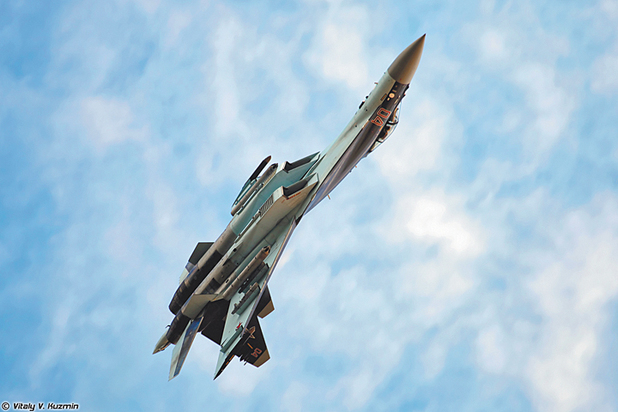 The first flight of the Su-35S took place on 19 February 2008. The «godfather» was also Sergey Bogdan. The air fighter is controlled by a single pilot. It is assisted by a powerful computer system with elements of artificial intelligence. It helps you choose a target and warns of danger.

Airplane coversheet makes it invisible to enemy radars. Supermaneuverability is largely provided by engines with a so-called controlled thrust vector. Using flaps that deflect gas jets from the jet nozzle at the right angle, the pilot can  do somersaults that other pilots would never dream of. The Su-35S has no equivalent in the world.

Powerful engines make it possible to accelerate the Su-35S to supersonic in seconds. Near the ground, its top speed is up to 1,400 km/h, at altitude it is over 2,000 km/h. The weight is 34.5 tonnes.

Airplane was one of the first to receive phased-array system. Such an antenna multiplies the fighter’s airborne target detection capability. For example, the «H035 Irbis» radar installed on the Su-35S can «see» a cruise missile a hundred kilometres away, while the US F-22 stealth aircraft can do so almost 200 kilometres away. The next, as they say, is a matter of technology and long-range missiles. The Su-35S has these in its arsenal. The total weight of ammunition which it can carry is 8 tonnes. As an example, up to 12 rockets of air-to-air missile.

The Su-35S also has airborne «anti-radar», which will warn the pilot if he is caught in the enemy’s crosshairs. There’s a gentleman’s kit of protective gear for that. For example, the enemy will see several marks from the Su-35S on their screen and will hardly be able to tell which of them are fake and which are real. There is an opportunity to dodge an attack. For this particular case, super manoeuvrability is very important.

According to unofficial data, the cost of one Su-35S being built in Komsomolsk-on-Amur could be 1 billion rubles. But, as Syria has shown, the plane is worth that kind of money.

The Sukhoi Su-35S is the Su-30SM swing fighter «4++» transitional generation counterpart. It is mass-produced in Irkutsk. It takes advantage of the experience of an export contract to build nearly 300 Su-30MKI aircraft for the Indian Air Force.

The main difference with the Su-35S is that there are two people in the crew. They are placed one behind the other in tandem in a cabin. Expanded aircrew reduces the burden on pilots and allows the distribution of duties during piloting, aerial combat and bombing. 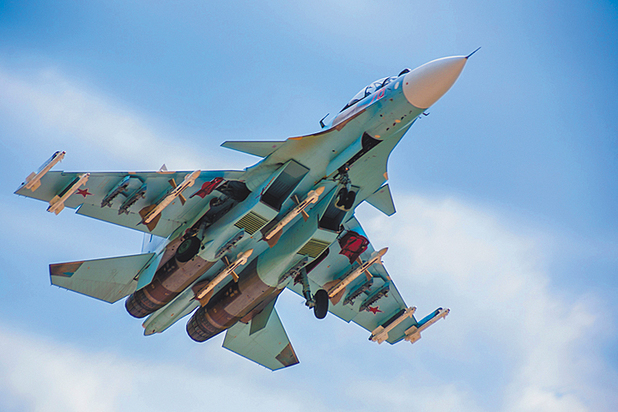 The Su-30SM is designed to gain air supremacy. It can strike enemy airfields at great depths and destroy air, ground and naval targets, including at night and in difficult weather conditions.

The aircraft is classified as super manoeuvrable. Its engines, too, can change thrust vector on command from the automation. Su-30SM can remain in the air for up to 3.5 hours without refuelling and can perform missions at distances of up to 1,500 km from the airfield.

Irkutsk aircraft are serving on the front lines, including in Crimea, Kaliningrad and Syria.

The Su-34 is a flying tank regiment

The flattened, duck beak-like nose of the aircraft is a distinctive feature of another brainchild of the Sukhoi design bureau, the Su-34 frontline bomber. The flat, wide bow was needed to accommodate a crew of two. In contrast to Su-30SM a pilot of Su-34 and its navigator seat next to each other instead of sitting behind each other. It makes easier work and communication. 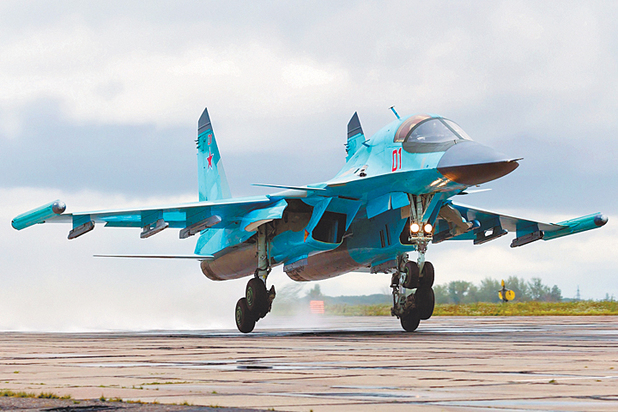 During the war attack aircraft Il-2 earned the nickname «flying tank». The Su-34 bomber, in terms of the power of its modern warheads, could well be called a flying tank regiment, or even a division. Its maximum payload is 12 tonnes.

The Su-34’s manoeuvrability is also fine. The design is based on a longitudinal-triplane aerodynamic scheme, which ensures high manoeuvring characteristics.

The first flight of the Su-34 prototype took place as late as 13 April 1990. But it went into production much later, in 2008. The general lack of money in those years had its effect. In the long term, the Su-34 will replace the Su-24M frontline bombers, which, incidentally, also performed very well in Syria. Russian VKS has already ordered more than a hundred bombers. After the Su-34 made its combat debut in Syria, demand for the aircraft increased overseas.

What would you, the reader, call a missile carrier capable of destroying several cities of millions of inhabitants in a single flight? NATO called him «Black Jack» — like a cowboy with a fast revolver. And this is about our supersonic missile-carrying Tu-160. 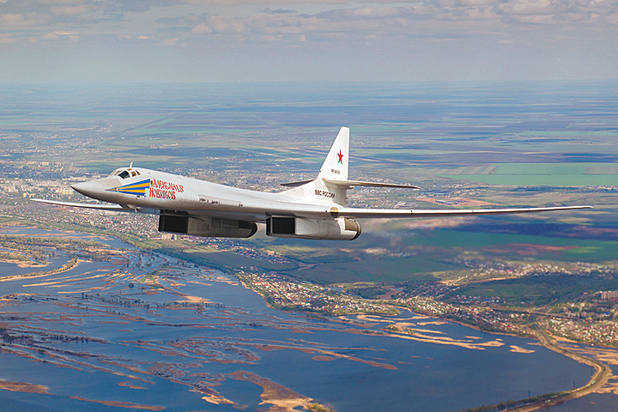 It is the heaviest production combat aircraft. It weighs 275 tonnes. The maximum payload is 45 tonnes. For a comparison, the weight of the Su-35S with all its ammunition is 34.5 tonnes. And African elephant, on the other hand, weighs only 5-6 tonnes.

Inside the giant fuselage of the Tu-160 are two turret-like launchers for long-range nuclear cruise missiles. The Tu-160 can carry 12 such missiles. The range of X-101 missiles with conventional warheads and their thermonuclear counterpart X-102 is over 5,500 kilometres.

Russian VKS from time to time shows the global capabilities of our Tu-160s to the world. They have flown across the Atlantic several times to Venezuela and recently returned from a «cruise» to South Africa.

Using conventional rather than nuclear missiles, Tu-160 aircraft have bombed terrorist bases in Syria several times. The missiles were launched hundreds of kilometres from their targets, over the neutral waters of the Caspian Sea.

President Putin flew in flight deck of the Tu-160 in August, 2005. Then he was able to see the pilots at work during the rocket launches.

Actually, the Tu-160 is the brainchild of the Soviet aircraft industry. He made his first flight in 1981. In the service since 1987. When the Union was partitioned, some of the nuclear weapon carriers ended up on Ukrainian territory. Though not without difficulty, they managed to get them back to Russia.

Given the unrivalled fighting qualities of the One Hundred and Sixties, it was decided to revive their serial production in Kazan. Ministry of Defence has ordered several dozen upgraded Tu-160M2 strategic missile carriers. The contract was signed in 2018.

According to Dave Majumdar, a columnist for the US magazine The National Interest, Russia has chosen a sensible and affordable way to develop strategic aviation by betting on the Tu-160M2. According to him, the Tu-160M2 will not just be a new-built machine, it will be a completely new aircraft in an old «wrapper». With the new engines, airplane will be able to fly even further without refuelling. Today, his maximum is 7,300 kilometres. With refueling in the air (such experiments have been conducted) Tu-160 can cover more than 20 thousand kilometres per day.