It is hilarious how foreigners describe Russian dishes.

There are many things in Russia that surprise tourists. For example, that only tourists like themselves wear ushanka hat. Or that in an airport a bear does not meet them with a balalaika on a bicycle, but by ordinary workers. And they rarely eat red caviar using a bast shoe… By the way, talking about food. Russian traditional cuisine constantly surprises foreigners. People who try it, always recommend this one cuisine. And even make their own must have dishes guides. It’s humorous for Russians how they describe okroshka soup and pelmeni. We’ve picked up 10 of these dishes and foods that have become a real gastronomic treat for tourists. 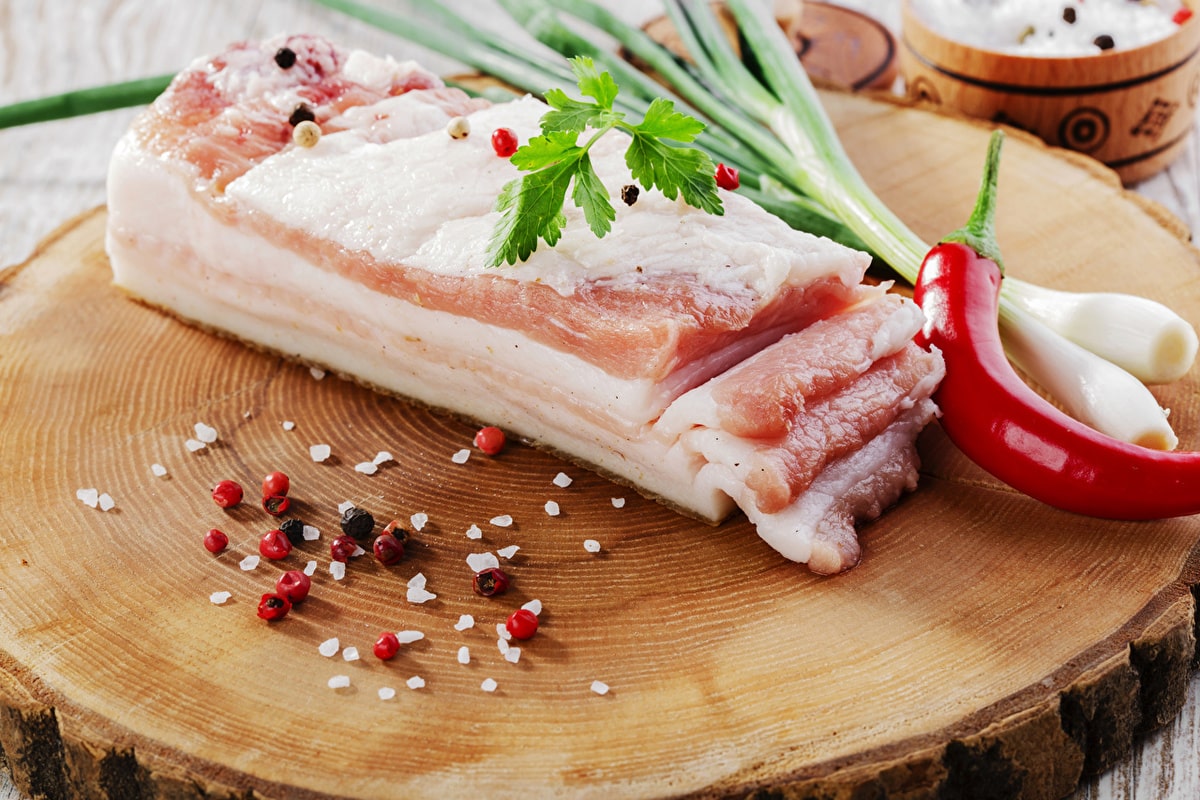 Quote: «Salo is a distant cousin of bacon, made up of layers of fat, usually salted and seasoned with black pepper. It is kept in a fridge and eaten row. Essentially, you eat pure lard. More delicious with black bread!» Foreigners think it’s worth to try eating salo only because its sounds and looks awful for want of habit. But what a great smell, what an incomparable taste! A travel portal advises: «It is perfect to dish to get out of your comfort zone». 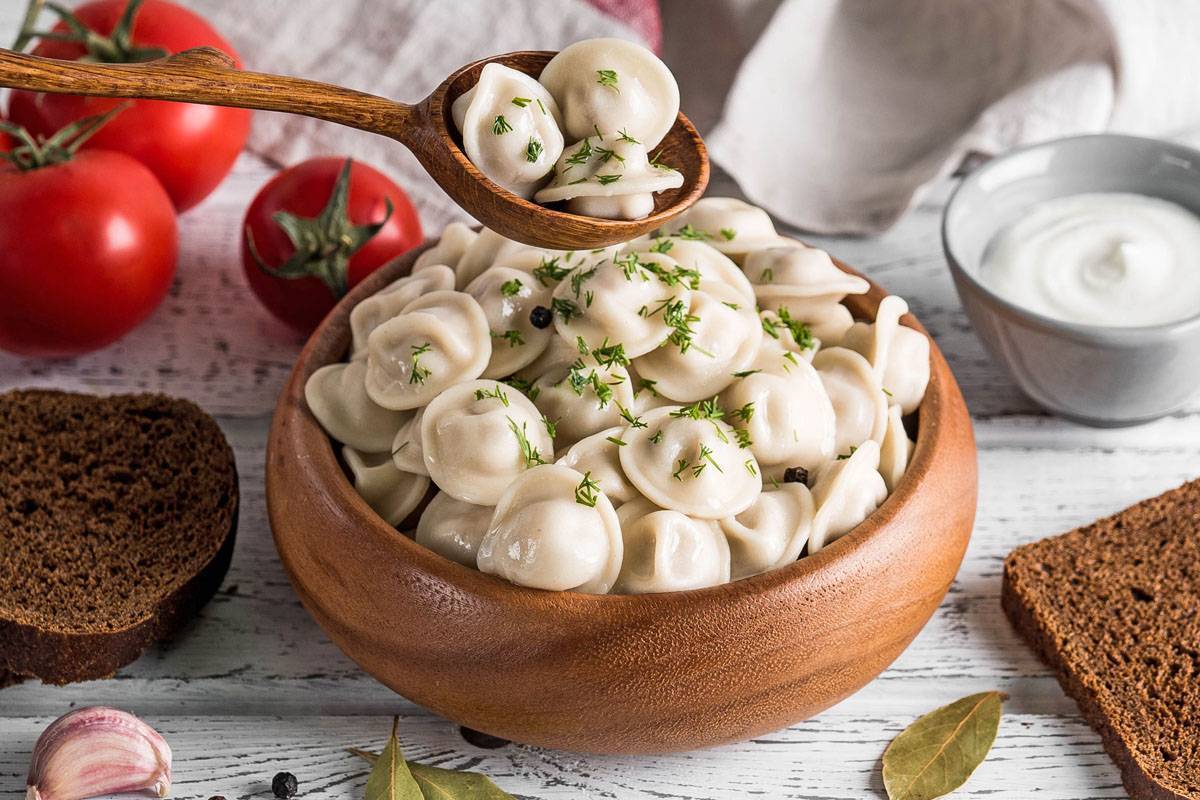 Pelmeni are funny-described because it is served with smetana which has no translation. «Cream-cheese, but thick and heavy,» — it’s described something like that. That’s why sometimes «smetana» is written in Latin characters. About pelmeni tourists say: «They are like tortellini, but much better». Or this: «It’s a specific Russian adaptation for Chinese dumplings. It is made from thin unfermented dough, like for pasta. Stuffed with minced meat, onion, mushrooms and sometimes turnip. Pelmeni with turnip — isn’t that great? Even not every Russian try it.

Every Russian knows that buckwheat porridge has a lot of useful substances. And they get used for its brown-grey colour and learned to create new flavours by adding mushrooms and onions or milk and butter to the porridge. But for a foreigners buckwheat porridge is still a jumble and they don’t want to try it. Never mind! More for Russians. 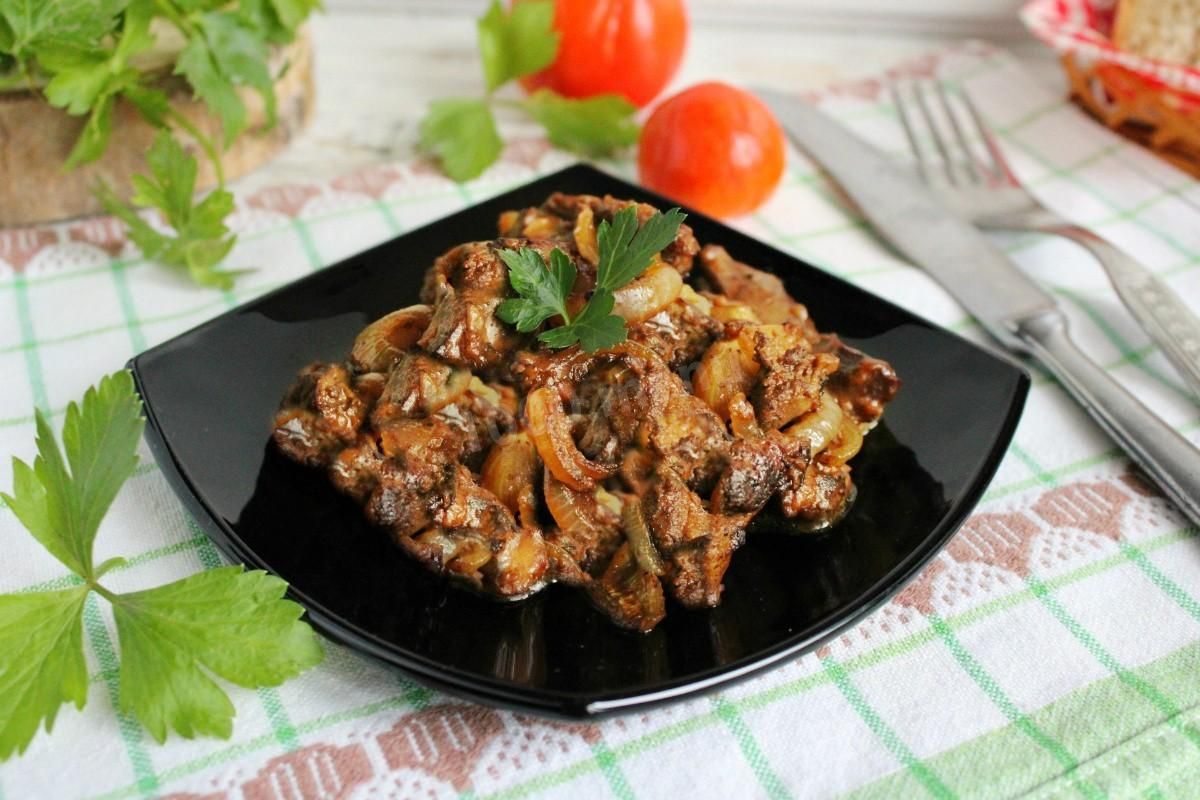 It is a stockpot of minerals and nutrients. People with low hemoglobin say that the liver is not just a food, but some kind of cure for all ills. And if you fry the liver just right, spice it up with some spices and all that mysterious smetana, it turns out  quite tasty. But foreigners are afraid of dark look and strange taste. And if it’s liver with buckwheat porridge for many people, trying such a duo on a plate is like bungee jumping. 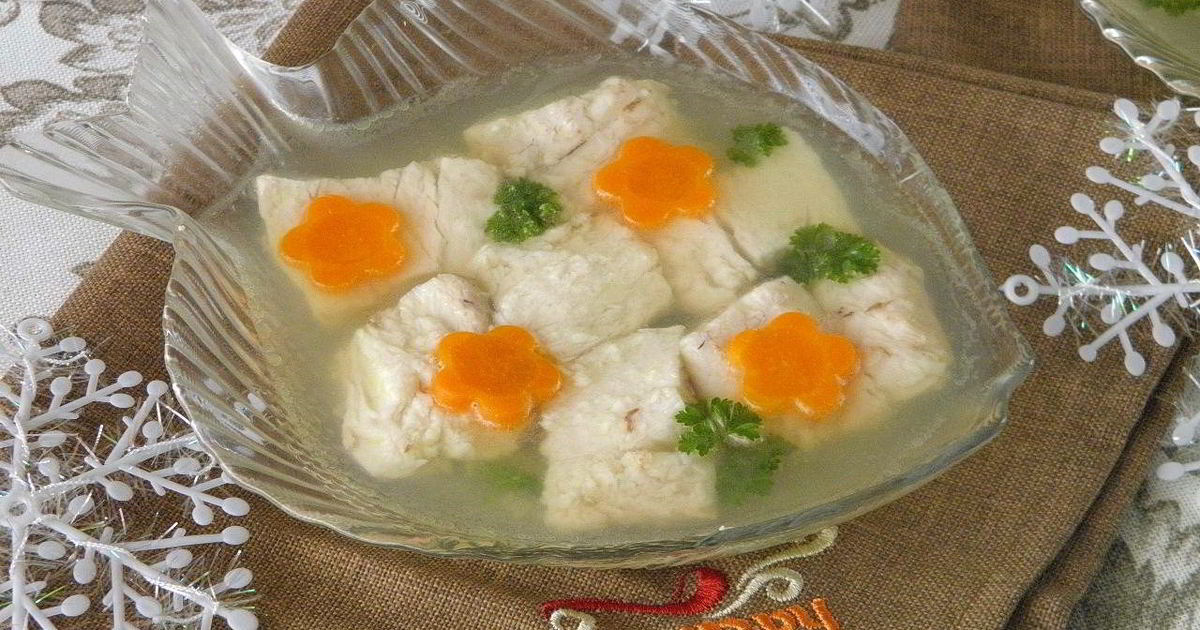 “Fooey! This is the worst jellied fish I ever ate!” — says the truthful and disappointed Hippolyte in “Irony of Fate, or Enjoy Your Bath!”. And a lot of foreigners support him and surprise that it could be in the other way. Is it really possible to eat cold, slippery fish-flavoured food on New Year’s Eve and enjoy it? Yes, if you add horseradish mustard. Although a lot still depends on the talent of the housewife. After all, it might not really be tasty at all. 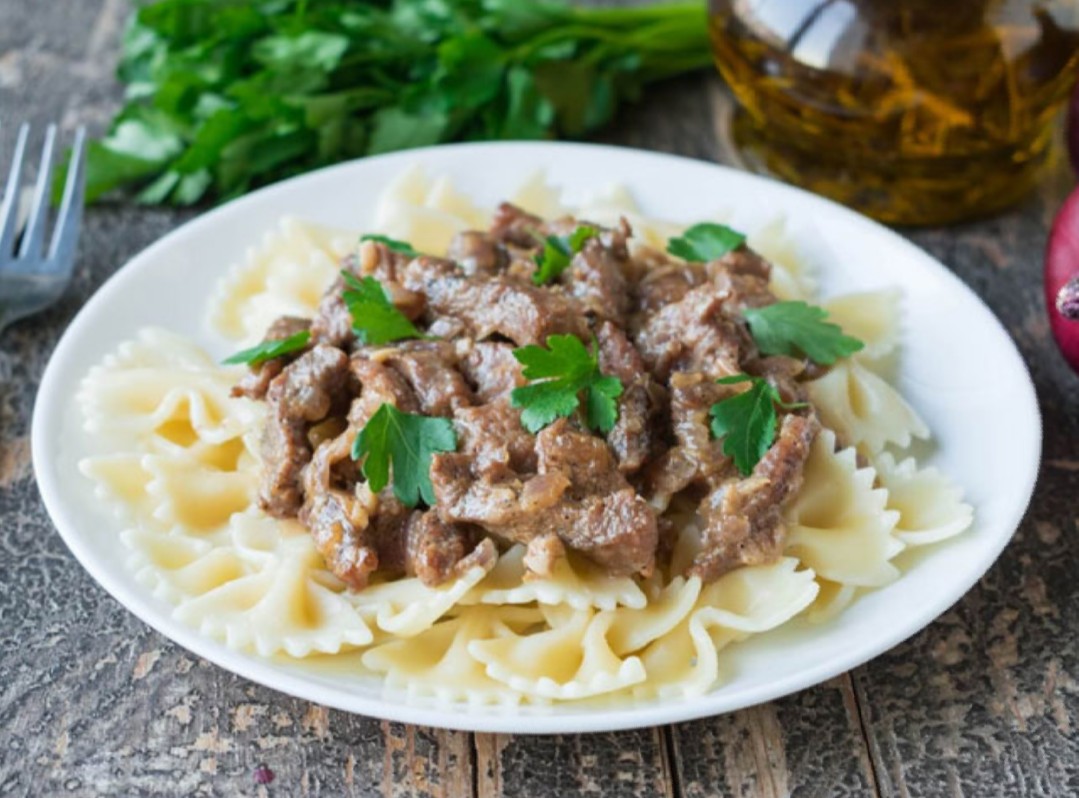 This dish is always terrified by tourists. By the way, it is unclear why. Because beef stroganoff is just pieces of roasted beef with smetana sauce. Probably the thing is with smetana — if there is no such meal, you can’t cook it with beef. «Healthy and homemade dish. Looks like what do you eat with your family on Sunday,» — recommends in the Net. 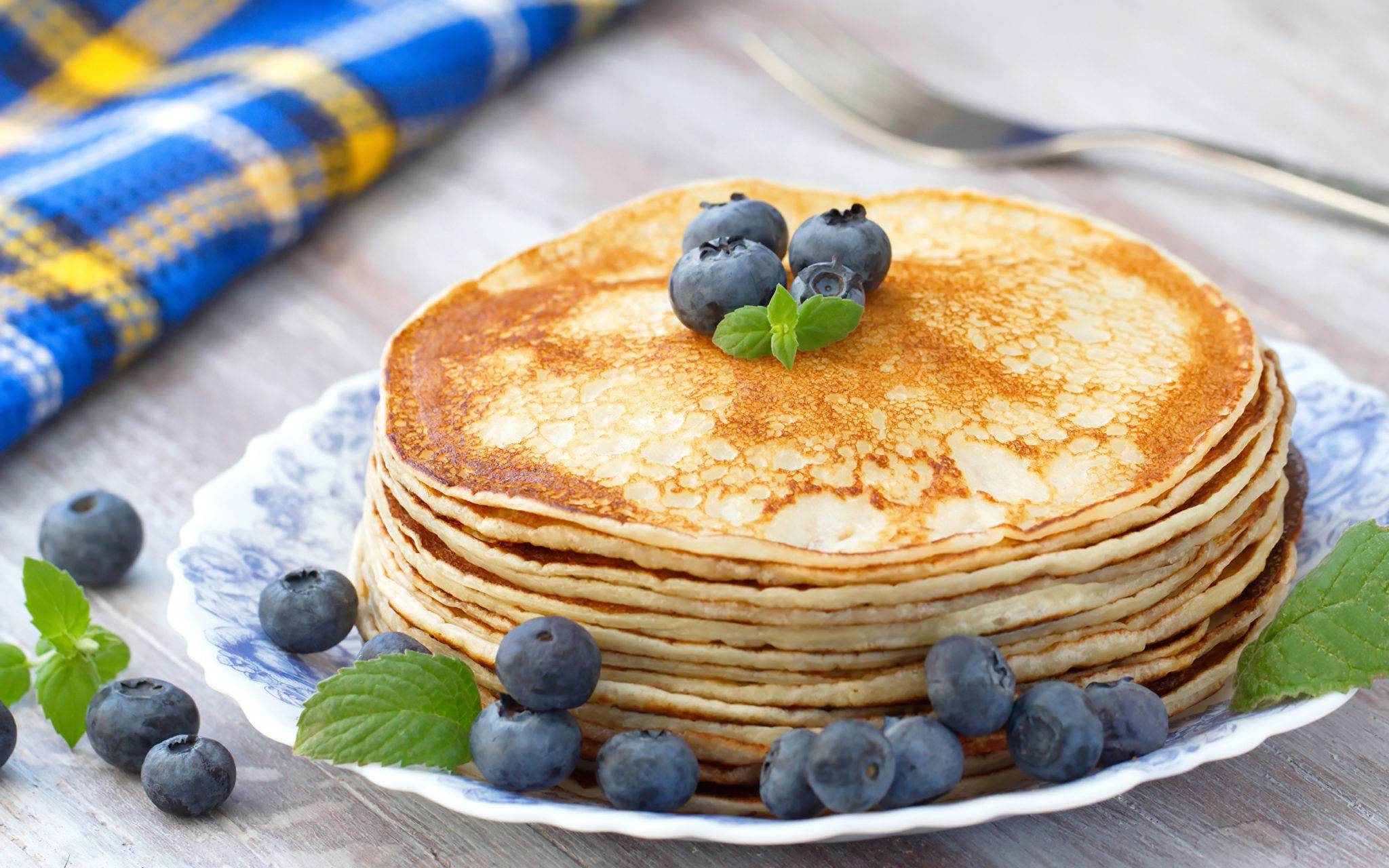 Foreigners call blinis as crêpes. It is thin fried dough, which is made in Central Europe. Someone also calls blini as pancakes. Obviously, pancakes are more likely to flapjacks. Blini describes like this: «Blini is an important part of Russian cuisine. At a Russian festival called Maslenitsa, blini celebrate the beginning of spring. Blini are oily and thick than crêpes. It is served with meat, cheese or something sweet. The best is to eat blini with caviar or smetana. The Russians also add a herb called dill to the smetana, which the Russians shove literally everywhere. 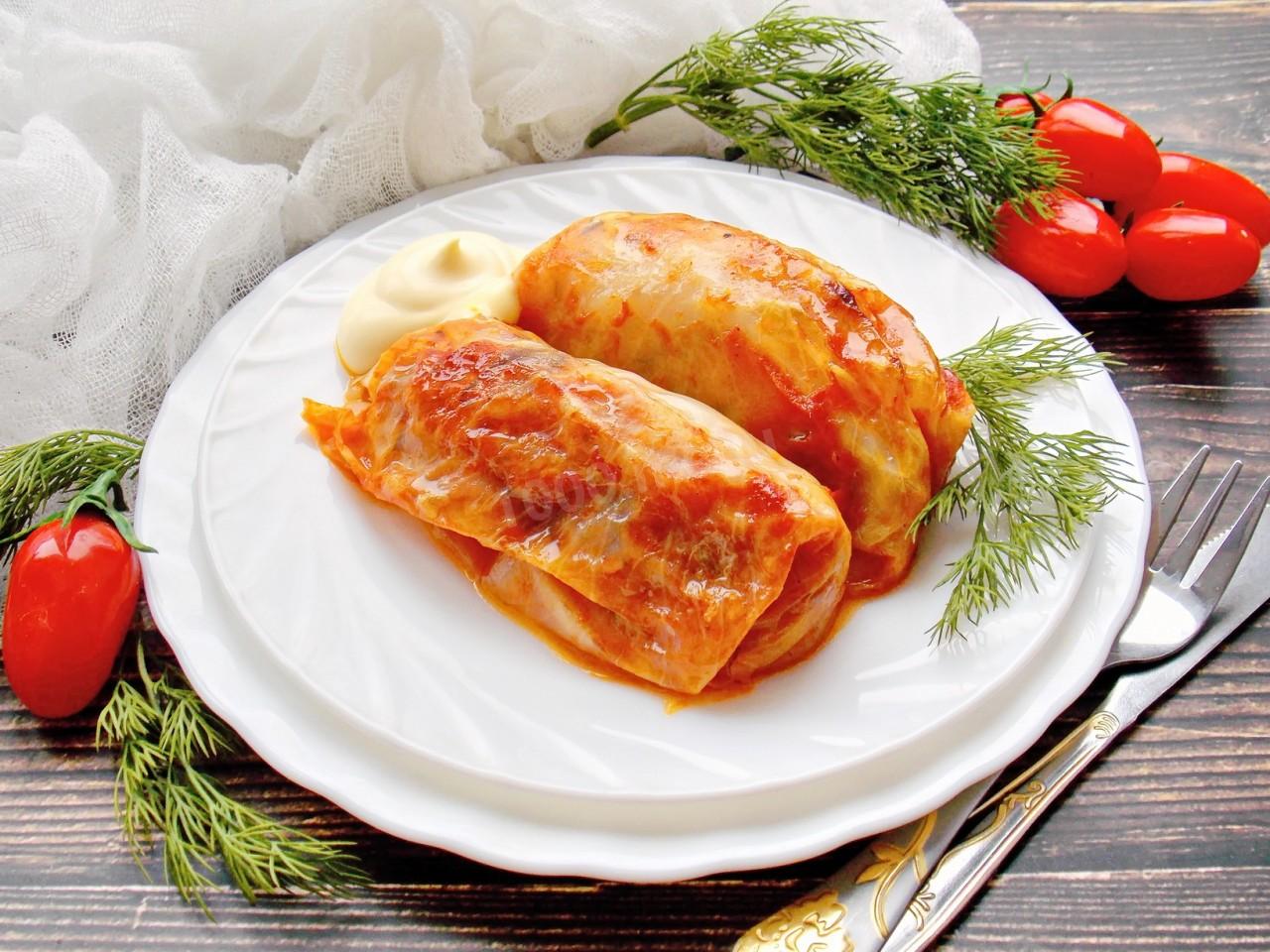 «Shredded beef wrapped in cabbage and steamed,» describe the golubtsi. — Boiled cabbage isn’t to everyone’s taste, but the smetana on top makes everything better. And you either love golubtsi or you hate it. There is no other way». Also, foreigners say that without smetana or tomato sauce golubtsi look horrible. There is no tasty in stuffed cabbage leaves. How did they even work it out? 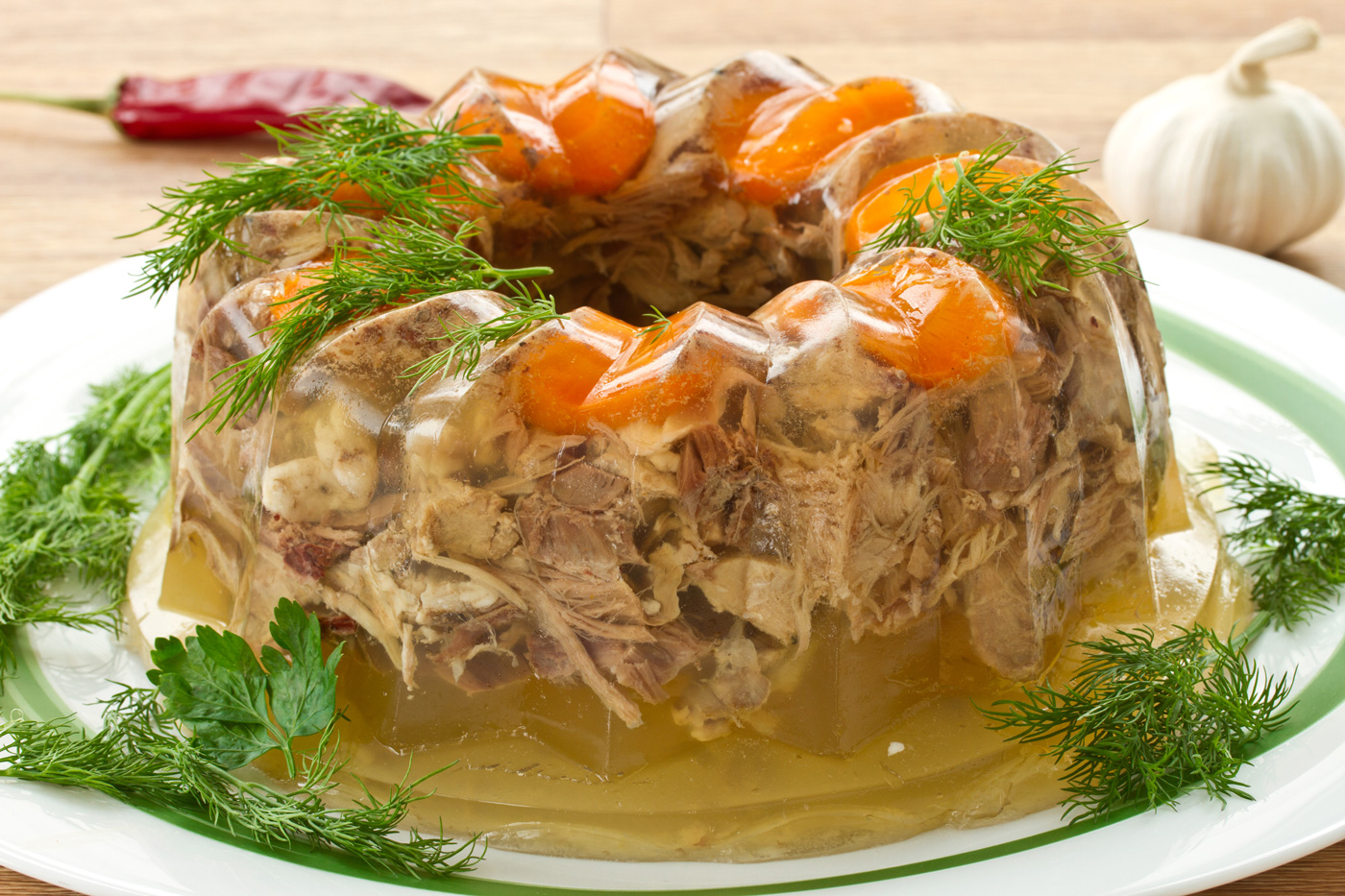 Russian aspic is a twin brother for jellied fish. But it described awfully: «Imagine a jelly, but not with fruits, but pieces of meat». It looks like a very thick frozen meat broth. Sounds unattractive, but this aspic is a healthy and tasty dish. Especially with vinegar and mustard». Russian aspic is a very controversial dish for the Russians. Some likes it, some not. But they can’t imagine New Year’s meal without  it. And, yes, it is healthy. It has so much collagen in it that your joints, skin and hair are weeping with happiness. 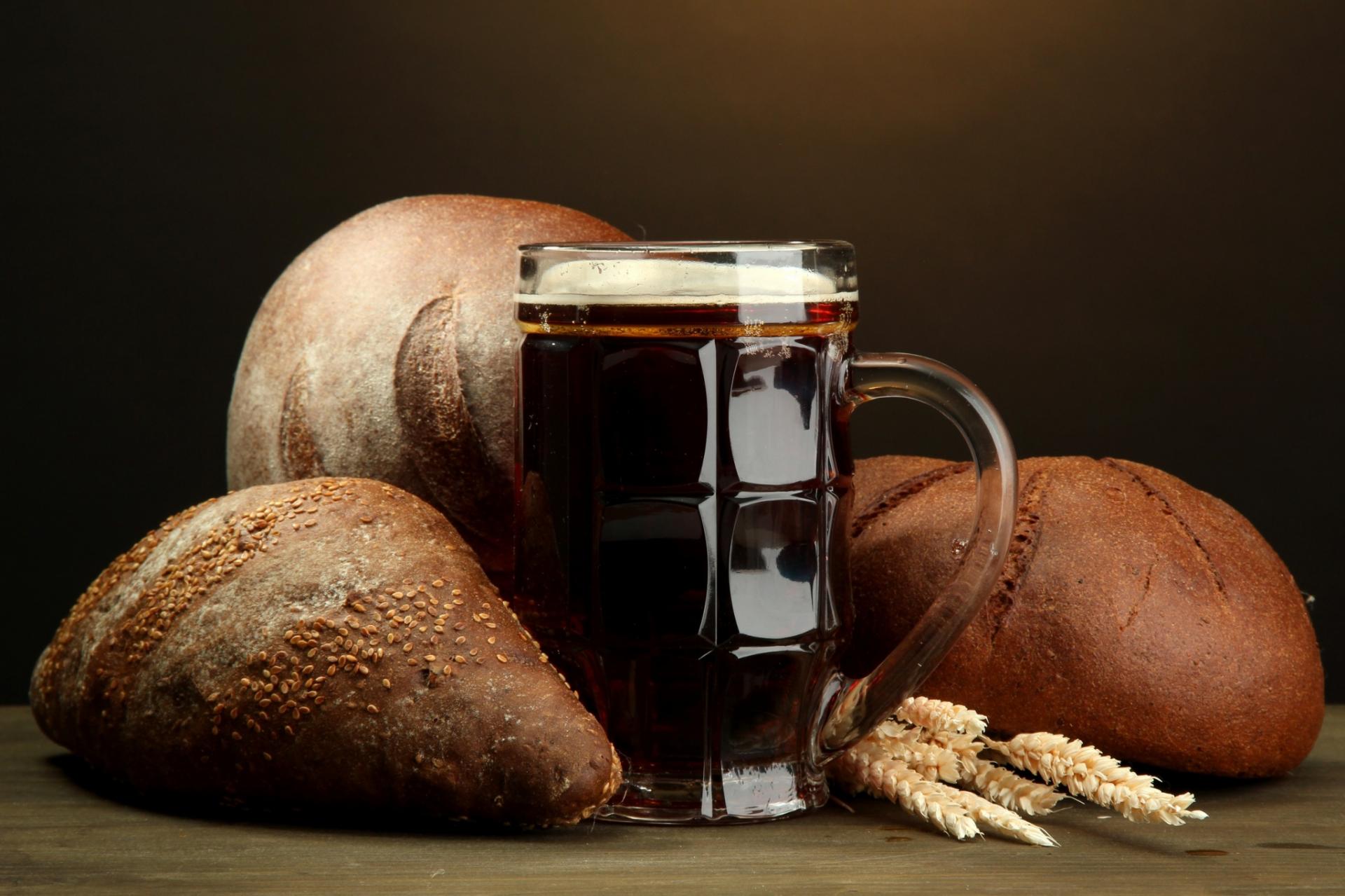 «Kvas is a traditional Russian low-alcohol drink made from fermented rye bread, yeast or berries», — written on tourist websites. Or this: «A refreshingly mild drink. Includes malt, like beer. The Russian allow to children to drink kvas unlimited, although it has a small percentage of alcohol in it. Sounds terrific. Because there is easier and understandable for foreigners explanation: Kvas is like cola, but instead of indecipherable ingredients, tastier and healthier. And there is no more alcohol in it than in kefir. Although kefir is also something completely strange to foreign stomachs. 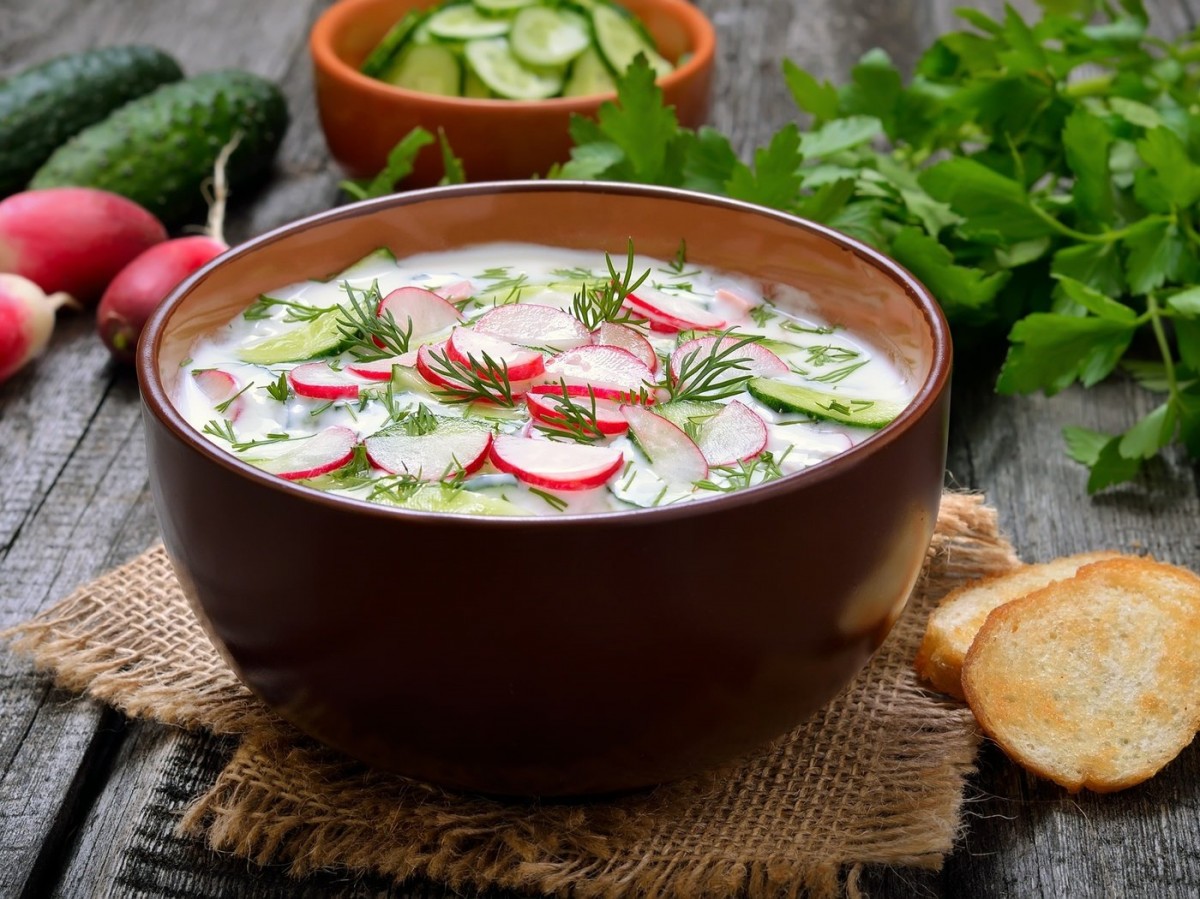 Okroshka is a cold soup. While in Russian cuisine soup is an essential part of the menu, for a foreigner it is a rarity. Except for cream soup. «It is quiet hard to describe it taste. You take cucumber, radish, boiled potato, beef and eggs, mix it and fill up kvas. To make this «beer soup» is better to add smetana and dill. The Russians add dill everywhere! believe that the key to the taste of okroshka is not so much the kvas, but the potatoes. «You can replace other vegetables, but they taste better with Russian potatoes,» — conclude foodie travellers. 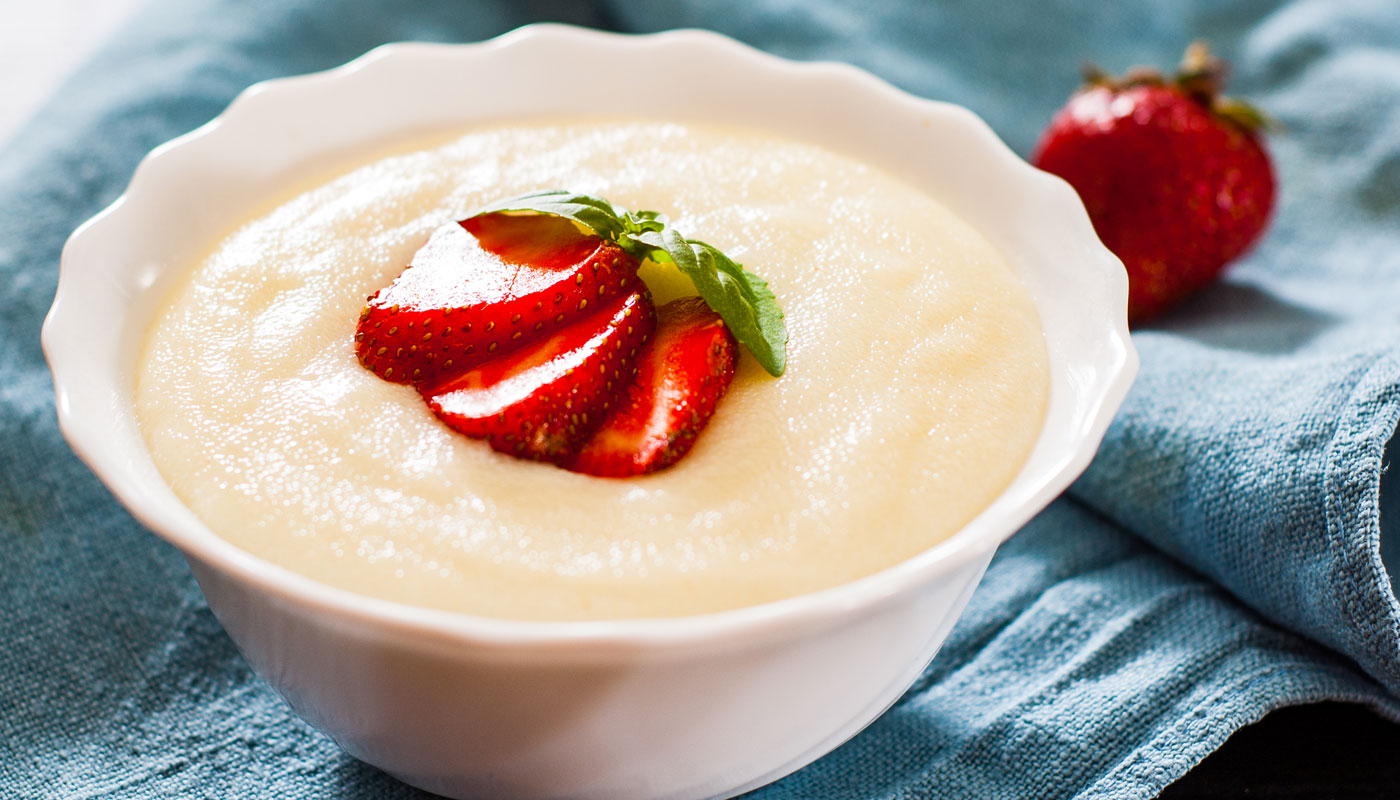 It’s the same with golubtsi — you can love or hate semolina porridge. But it’s an ordinary breakfast meal in Russian cafes. Many people devour it with gusto and even tears in their eyes, remembering their barefoot childhood. Foreigners are genuinely bewildered when they see such people eating a substance with a strange consistency, more like construction material than food. However, for them porridge is not the most usual dish. 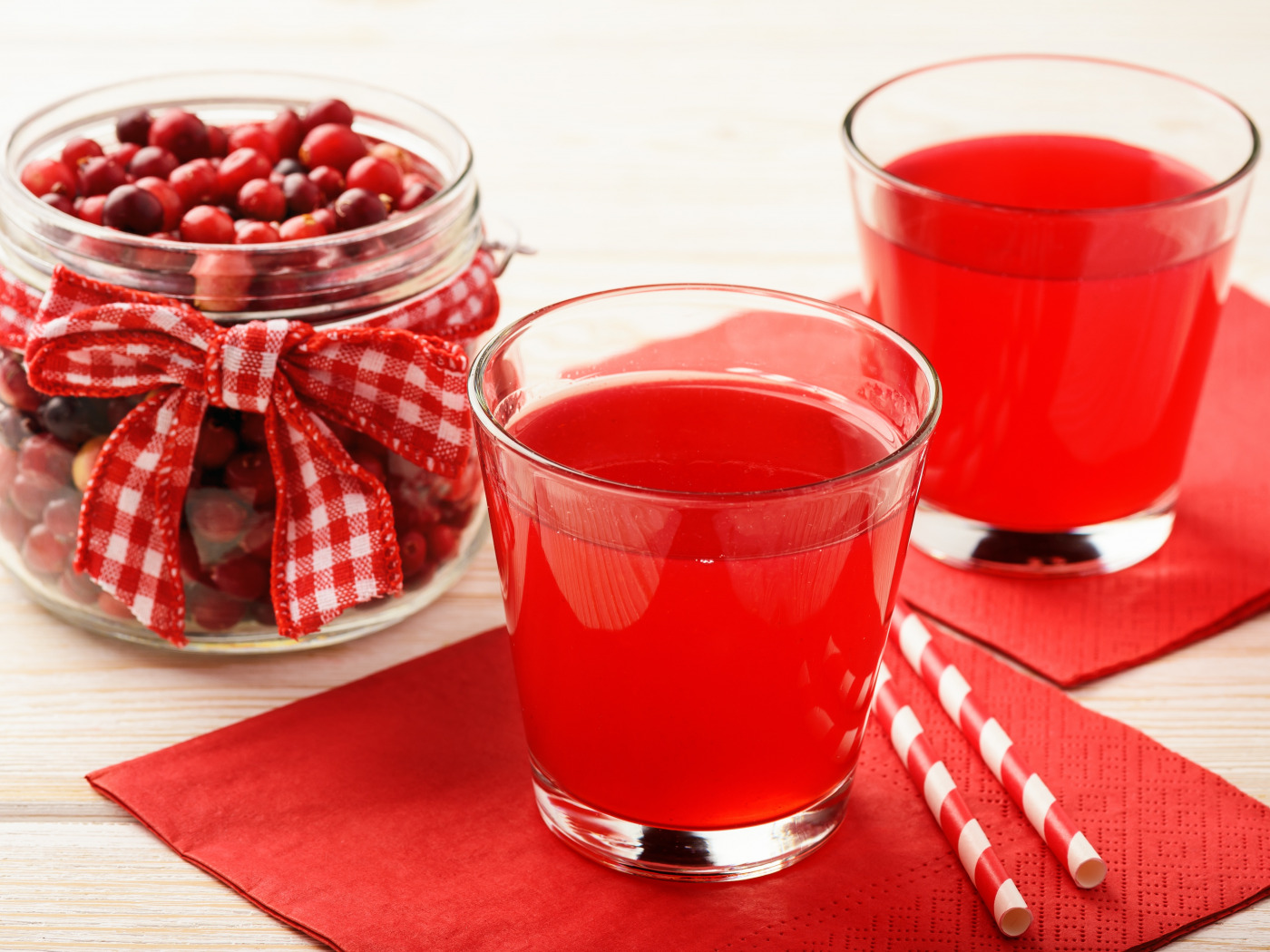 Kisel looks for foreigners as an uncooked dish, because it looks like undercooked jelly or marmalade. They find the smell and colour of the drink quite appealing, so tourists are keen to try it and find it quite tasty. Traditional Russian drinks are nonsense for strangers, like compote or morses. Last one was much loved by the Rasmus band when they were on tour in Russia. And one more: kisel is not a drink, commonly thought, but a meal. It should certainly serve with piroshki, which we’ll talk about below. 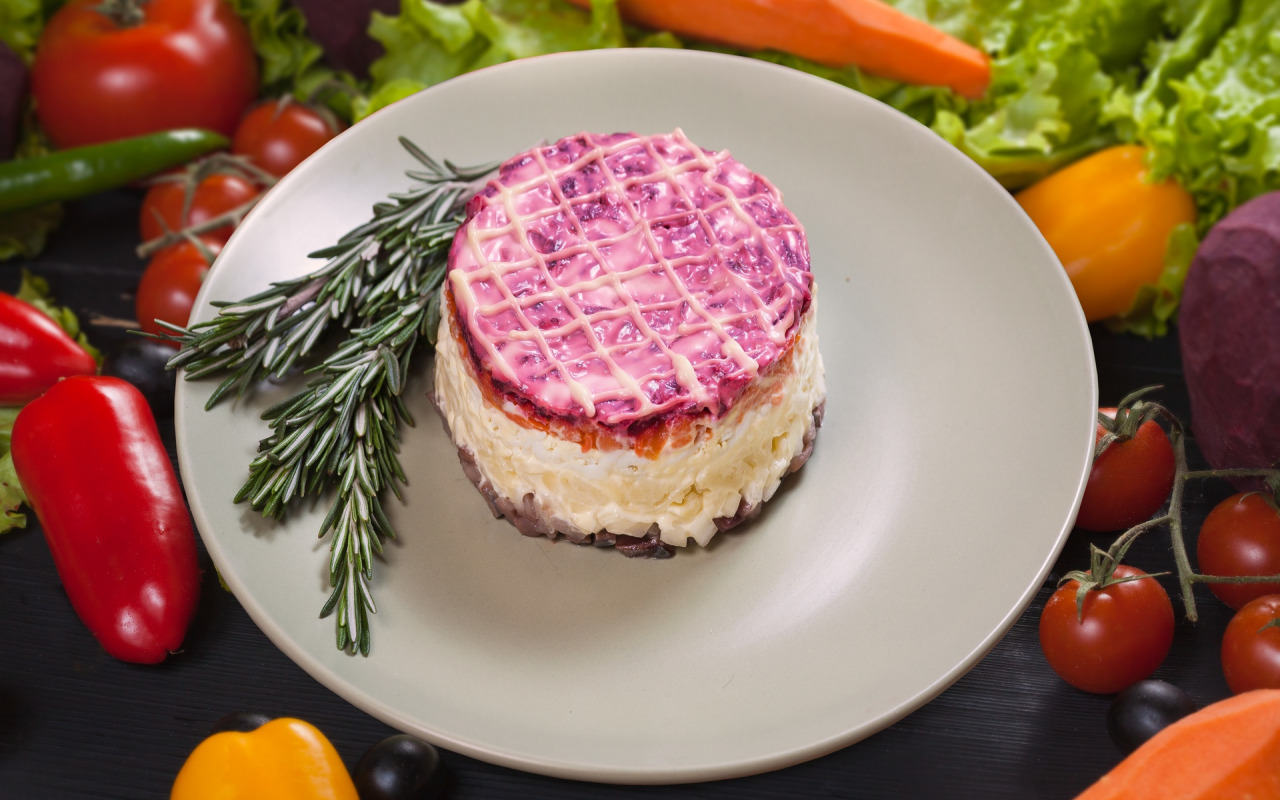 It’s more the name that scares you than the look of the dish. But since it is cold in Russia and there are sometimes bears on the streets instead of cats and dogs, a herring can also have a shuba-coat. Anything is possible in a cold climate. However, if it is clear that the shuba coat is a metaphor and the herring is under several layers of different ingredients, everything falls into place. Bears turn back into cats and dogs, and herring under a shuba-coat into a perfectly edible salad with fish, potatoes and beetroot. 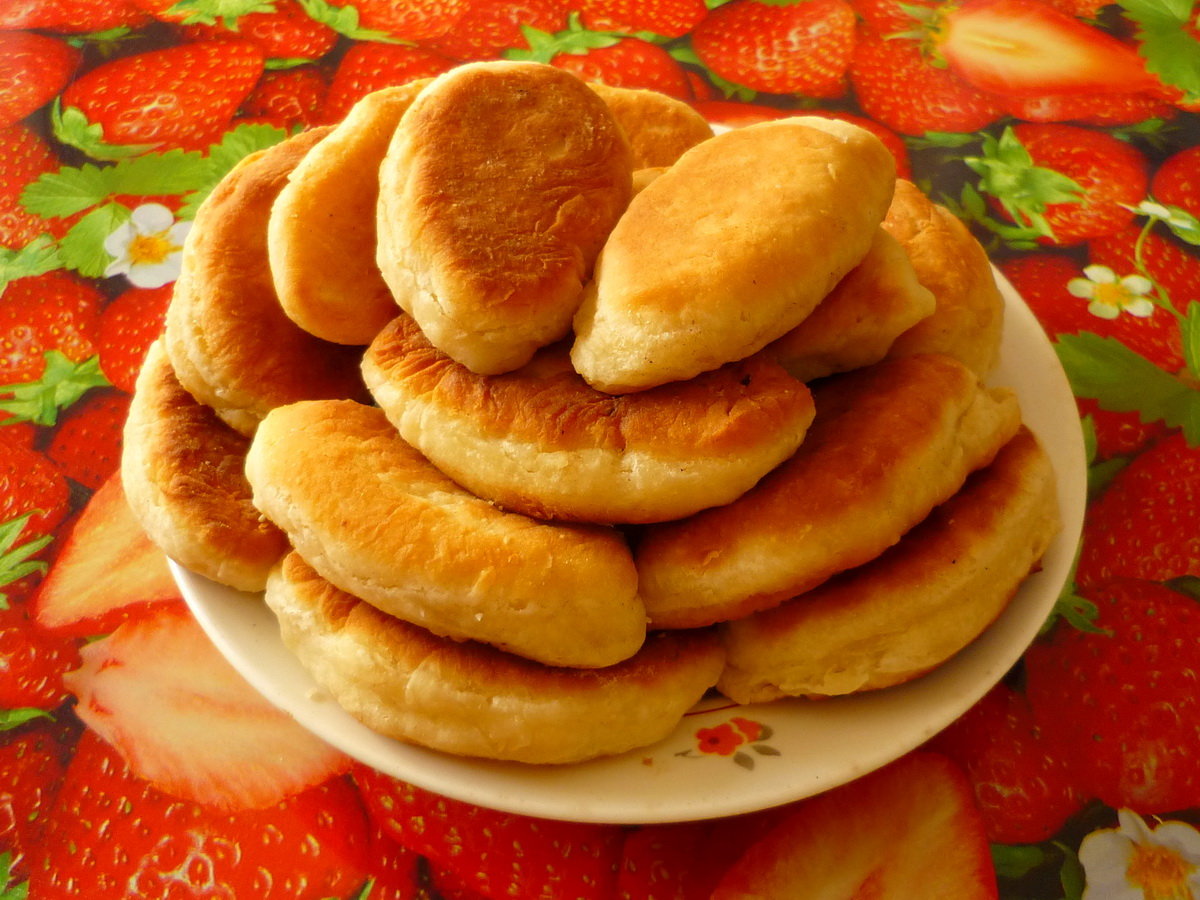 It would seem that there is nothing more familiar than piroshki. But no. In the West, they bake big pies and make quiche, but our portioned pies are nonsense to foreigners. «The most important part of piroshki is the dough. The stuffing is secondary,» Russians say. By the way, Tatiana Tolstaya, writer and cook, also believes that you can tell everything about a restaurant by the dough. But she’s picky about the fillings too. «These fried or baked piroshki can be stuffed with anything: potatoes, cabbage, meat, eggs, onions, unicorns and diamonds. It’s the perfect snack, and it’s very cheap,» tourists say of the piroshki. 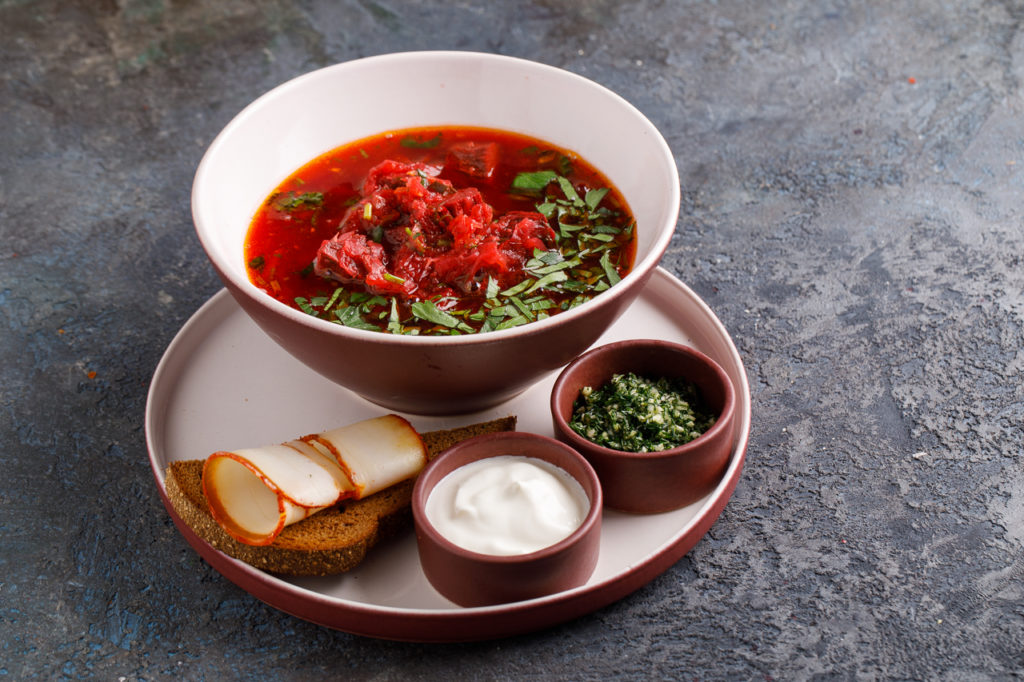 Yes, borscht is thought to have been invented by Ukrainians. «Even the Mars people,» we read on one of the US travel portals. — Who invented it, it doesn’t matter after the first spoonful. Beetroot soup sounds strange, but it’s delicious. Borscht is advised to be eaten in any form: hot or cold — on this we agree. «There’s nothing better than popping into the fridge at four in the morning and eating borscht,» is even the opinion we found. It seems this foreigner has been in Russia too long. Absolutely everyone who has written reviews about borscht recommends adding smetana to it.